For many, Julie Andrews' name conjures up images of a kind nanny dressed in black, with a jaunty little hat and a chatty umbrella, whose magic and imagination whisk away on delicious adventures a couple of kids from Victorian England. Julie Andrews is Mary Poppins, no doubt about it. But we mustn't forget that this intelligent actress and excellent singer has a filmography far longer than the number of songs she sung in this famous film.

Born in Surrey (England), on 1 October 1935, a charming voice led to Julie Andrews' discovery when she was barely a child. At only 19 she debuted with The Boy Friend on Broadway, where she won the hearts of demanding New York audiences, going on to become a bona fide actress with My Fair Lady in 1956. Her popularity increased on starring in a lovely TV version of Cinderella.

It was nevertheless some time before she was to be noticed by cinema. When preparations were under way for the film version of My Fair Lady, she harboured hopes of playing the leading lady, but Hollywood didn't trust an English star and chose Audrey Hepburn instead. Julie nevertheless had her little revenge when, that same 1964, Disney offered her the part of Mary Poppins, a role with which she was to win the Academy Award for Best Actress. This marked the start of a career on both stage and screen, with extraordinary success in both areas. The Sound of Music (1965) by Robert Wise, Hitchcock's Torn Curtain (1966) or Darling Lili (1970) by Blake Edwards, to whom she has been married since 1969, and who was to become one of the most important directors in her career with unforgettable titles including 10 (1979), S.O.B. (1981), Victor/Victoria (1982) or That's Life (1986), confirmed her versatility as an actress.

Elegant, adaptable, unrepeatable, with a subtle sense of humour, Julie Andrews is a star and great dame of both theatre and cinema. 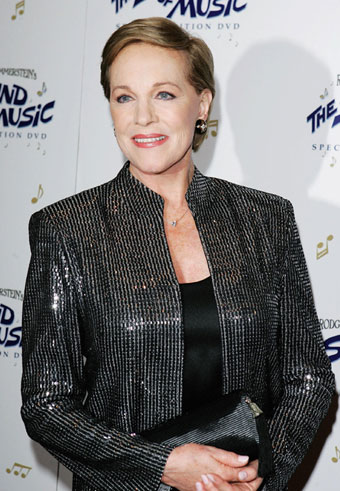