The four projects to take part in the 2015 residencies programme have now been selected.
Oskar Alegría, Marianne Slot and Paz Lázaro made up the committee of experts.
The programme will incorporate a new feature: the REC Post-production Award.

In February this year we presented the IKUSMIRA BERRIAK project, organised in collaboration by Tabakalera-International Centre for Contemporary Culture, the San Sebastian Festival and the San Sebastian European Capital of Culture 2016 Foundation, with the support of Donostia Kultura and the Filmoteca Vasca Foundation.

The principal objective of IKUSMIRA BERRIAK is to promote audiovisual creation at all stages: training, production and exhibition. A call for submissions was therefore launched for residencies among filmmakers from three festivals and national and international initiatives related to the region: the Kimuak short film selection; Labo (the experimental short film selection at the Clermont-Ferrand Festival), and the International Film Students Meeting (EIECINE). The call was also open to local filmmakers.

Having studied the projects received, IKUSMIRA BERRIAK has selected the four to participate in the 2015 residencies programme:

Complete information on the projects, the committee of experts and the REC Post-production award.

With the support of: 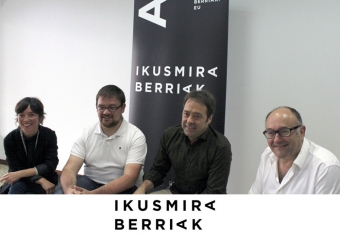