Anjel Lertxundi (Orio, Gipuzkoa, 1948) is a writer and journalist in addition to film and television screenwriter. His production encompasses literary genres such as works for children and youths, narration, essays and poetry generally written in the Basque language. He has directed two films, Hamaseigarrenean aidanez (La Apuesta, 1985) and Kareletik (Por la borda, 1987), based on his own screenplays.

National Essay Award 2010 for Eskarmentuaren paperak, translated into Spanish in 2010 with the title Vidas y otras dudas (Lives and Other Doubts), he is the author of other essays including Mentura dugun artean (While We Stand a Chance, 2001) and Italia, bizitza hizpide (Italia, el oficio de vivir, 2004). He has won the Basque Literature Award twice, in 1983 for Hamaseigarrenean aidanez, and in 1999 for Argizariaren egunak (Days of Wax), and also on two occasions – in 1983 and 1992 – the Critics’ Award for Narrative in the Basque language. His novel Otto Pette, is considered to be a landmark in the normalisation of literary Basque language, and to be an indispensable reference in the field of modern Basque narrative. Zu (You) is his last work to date. His most important narrative works have been translated into Spanish and some of his works have also been translated into languages including English, German, Italian, Russian, Galego and Catalan.

Full fellow of Euskaltzaindia (Royal Academy of the Basque Language), he is one of the founder members of the Basque Writers’ Association and was its first chairman (1982-1985). He sat on the Official Selection Jury at the San Sebastian Film Festival in 1983. 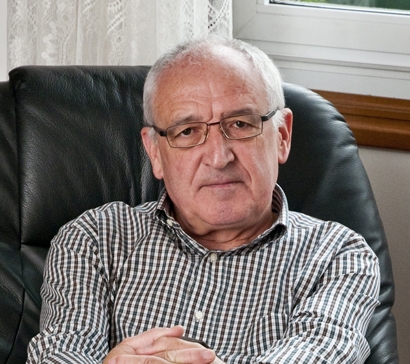