Donald Sutherland is one of the most respected, prolific and versatile of motion picture actors, with an astonishing resume of well over one hundred and fifty films, including such classics as Robert Aldrich's The Dirty Dozen; Robert Altman's M.A.S.H.; John Schlesinger's The Day of the Locust; Robert Redford's Ordinary People; Bernardo Bertolucci's 1900; Philip Kaufman's Invasion of the Body Snatchers; Nicolas Roeg's Don't Look Now with Julie Christie; Alan Pakula's Klute with Jane Fonda; Federico Fellini's Fellini's Casanova and Brian Hutton's Kelly's Heroes with Clint Eastwood (who later directed him in Space Cowboys).

For the distinguished body of his work, Sutherland received a 2017 Honorary Oscar from the Academy of Motion Pictures Arts & Sciences.

Sutherland is currently filming opposite Nicole Kidman, again as her father, in The Undoing, HBO's high-profile six-episode limited series written by David E. Kelley and directed by Susanne Bier. He will next be seen on film in September in Ad Astra co-starring with Brad Pitt for director James Gray when the film premieres at the Venice Film Festival, as well as the thriller The Burnt Orange Heresy, directed by Giuseppe Capotondi, which will close the same edition of the Venice Film Festival.

Sutherland most recently starred as J. Paul Getty in director Danny Boyle's FX anthology series Trust and in the Sony Classics film The Leisure Seeker, opposite Helen Mirren,
He was 'President Snow' in all four enormously popular film adaptations of The Hunger Games series.  He has appeared as Nicole Kidman's father in Anthony Minghella's Cold Mountain; as Charlize Theron's father in F. Gary Gray's The Italian Job and as Mr. Bennett, Keira Knightley's father, in Pride and Prejudice.  For the latter he received a Chicago Film Critics nomination. He starred opposite his son Kiefer in Forsaken, a period Canadian Western, which premiered at the 2015 Toronto Film Festival.

He was producer, screenwriter and star (voicing the lead character, 'Captain Johnson') of Pirate's Passage, an animated movie based on William Gilkerson's acclaimed novel, which won the Governor General's Award of Canada for Children's Literature in 2006.  The film won the 2016 international Kidscreen Award for "Best Special or TV Movie"

In television, Sutherland won both Emmy and Golden Globe awards as Best Supporting Actor for his performance in the HBO film Citizen X and he won a Golden Globe for his portrayal of Clark Clifford, advisor to President Lyndon B. Johnson, in the HBO historical drama Path to War, directed by the late John Frankenheimer.

On stage, he starred with Justin Kirk and Julianna Margulies in a critically acclaimed, Lincoln Center engagement of Jon Robin Baitz's Ten Unknowns, for which he received an Outer Critics Circle Award nomination for Best Actor. He also starred in the London, Toronto and Los Angeles productions of Enigmatic Variations, an English language translation (by his son Roeg Sutherland) of Eric-Emmanuel Schmitt's French play. 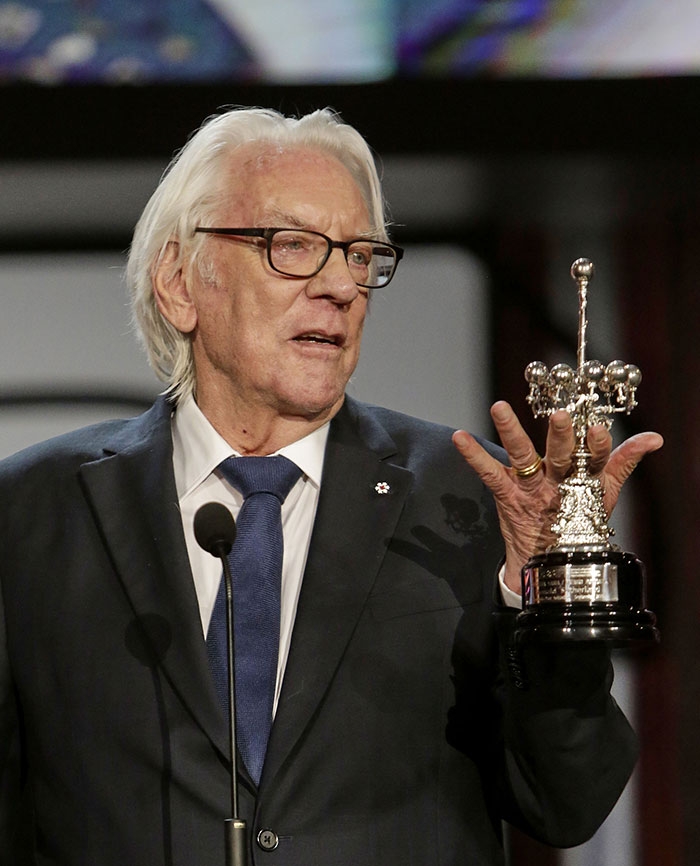