You are in: Home > 2021. 69th Edition  > News > San Sebastian Festival, Kutxa Fundazioa and the Elías Querejeta Zine Eskola reveal “other approaches” to the Festival’s early years

The exhibition First steps. Other approaches to the visual history of the San Sebastian Festival (1953-1970) opened today, in the Kutxa Kultur Plaza, on Tabakalera’s fourth floor. The show, organised by San Sebastian Festival, Kutxa Fundazioa and the Elías Querejeta Zine Eskola (EQZE), contains thirty images dating back more than fifty years, coming from the photographs stored in the Festival archive and from the Kutxateka collection.

The exhibition is curated by the Zinemaldia 70: all possible histories (Z70) research team, under the direction of Pablo La Parra Pérez. The Z70 project started addressing the Festival’s photographic heritage in 2020, following two lines of work: conservation, cataloguing and research into the photographic collection of the Festival archive and studying and perfecting the cataloguing of items in the Kutxateka collection. This exhibition is the first public result of said initiative, which currently remains ongoing.

The first directors who competed in the Official Selection

The idea of “first steps” encompasses a double meaning: it refers to the first years of the Festival while also making the first critical approximation to its photographic heritage in the framework of the Z70 project. The exhibition opens two channels of reflection exploring tensions related to politics, gender and class in the Festival’s early editions.

Thus, on the one hand, this exhibition looks, beyond the traditional portrayal of the stars, at the women who participated in the Festival, occupying professional positions outside the focus of the media spotlight or ignored by the prevailing histories of cinema, such as female directors, female screenwriters or the women workers themselves. For example, the exhibition retrieves photographs of the first three female directors to have competed in the Official Selection: Yuliya Solntseva (1965), Tatiana Lióznova (1966) and Judit Elek (1969). The show also examines the mechanisms of constructing and objectifying the film star as the focus of media consumption and fascination. As a paradigmatic example, the exhibition analyses the media construction of Pepa Flores as Marisol, from her first appearance in San Sebastian in 1960, at the age of only 12 years, until her appearances in later years as a pop icon.

On the other, First Steps. Other approaches to the visual history of the San Sebastian Festival (1953-1970) turns the spotlight on the tension existing between the popular expectation prompted by the Festival among the locals and the exclusivity and elitism of most official events, through photographs depicting activities beyond the red carpet. It similarly shows the Festival’s most institutional aspects and its instrumentalization by Franco’s dictatorship as an international showcase for the regime. This is the case of the images capturing the attendance of the Festival by personalities of the regime such as Carmen Polo and the presence of civil and military authorities at the official events, but also the opportunities of freedom opened in the Festival framework, such as the famous screening of Ama Lur at the Astoria cinemas in 1968.

Z70 is the result of the joint work of the San Sebastian Festival and the EQZE research department. This research project sponsored by Loterías y Apuestas del Estado, with the collaboration of Kutxa Fundazioa, Filmoteca Vasca and Tabakalera International Centre for Contemporary Culture, highlights the importance of the Festival’s document collection (letters, photographs, reviews and articles in newspapers and magazines, books, etc.), conserved in its archive since 1953. The main aim of the project is to generate reflection and discussion on the past, present and future of the Festival, as well as dialogues critical with cinematic creation and contemporary thought.

The exhibition is part of the Festival’s intention to shape itself as an activity lasting throughout the year. In this respect, related to the exhibition, the film by Judit Elek which competed at the Festival: Sziget a szárazföldön (The Lady from Constantinople, 1969) will screen as part of the Zinemaldia+ cycle on March 20. The film will be introduced by the head of the research project, Pablo La Parra Pérez and the student at the EQZE, Anna Babos. 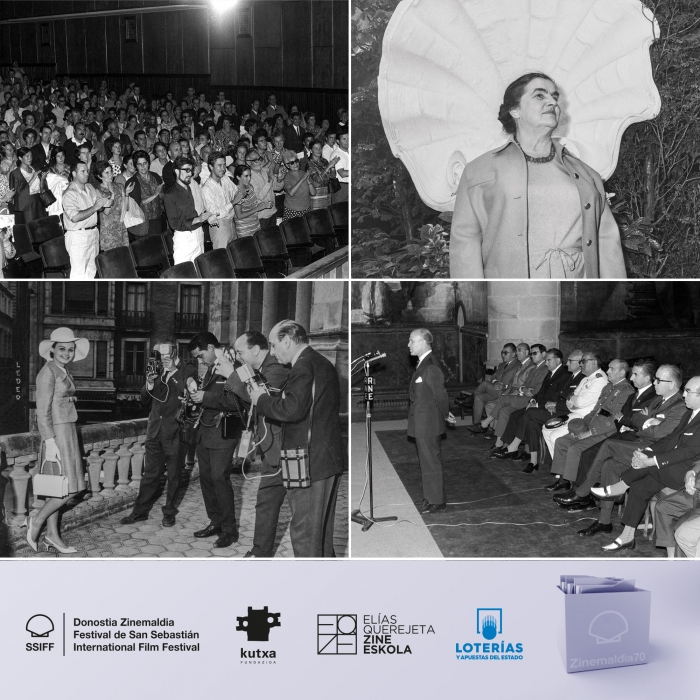