The actress Sigourney Weaver will feature on the official poster for the 69th San Sebastián Festival, which will be held from the 17th to the 25th of September. The image shows a black and white photograph of the American actress adorned with colouristic brushstrokes that refer to the posters from the other sections, which have also been designed by Eva Villar Estudio in collaboration with Juan Ugalde.

In 2018, the Festival launched a new graphic line of posters combining photography and illustration and featuring significant figures from international cinema. After the posters featuring Isabelle Huppert, Penélope Cruz and Willem Dafoe, in 2021 it will be Sigourney Weaver who lends her face to the 69th Festival in a design by Eva Villar from San Sebastián created from a photograph by Matthew Brookes.

Weaver’s first visit to San Sebastián coincided with her debut in cinema in Alien (1979), the film that launched her to fame thanks to the unforgettable character of Lieutenant Ripley. Since then, the actress has visited the city on two further occasions to present, once again in the Official Selection but after having become an international star, A Map of The World (1999) and A Monster Calls (2016). On this last occasion, Sigourney Weaver received the Donostia Lifetime Achievement Award.

Nominated for an Oscar on three occasions and winner of two Golden Globes, the actress has appeared in sagas like Alien or Ghostbusters and in films like Gorillas in the Mist (1988), Working Girl (1988), Death and the Maiden (1994), The Village (Velodrome, 2004) and Rampart (Official Section, 2011). The filmmakers that she has worked with include Ridley Scott, Peter Weir, James Cameron, Mike Nichols, Roman Polanski, Ang Lee and David Fincher.

“The Festival is pleased and honoured to announce that the image for its 69th edition will be Sigourney Weaver’s, an exceptional actress much loved by the public who has shone in the entire range of genres with characters that form part of the universal imaginary of cinema”, José Luis Rebordinos says. The director of the San Sebastián Festival hosted today's event at Tabakalera together with Joxean Fernández, member of the Festival's Management Committee.

"The value of human presence and culture"

According to the designer Eva Villar, the context of the current pandemic has played a decisive role in designing the posters for this year’s festival, which has made them “put the focus on the importance of real values, on the value of human presence and culture in the lives of citizens”. “We have made these posters a space where communication and art converge. As a studio, if the project allows us to do so, we like to force the pace of the creative process and take things further by forming teams with artists”, Villar adds, who has created her designs in collaboration with Juan Ugalde. The artist from Bilbao, who spends his time between Madrid and Berlin, is a figurative pop artist whose work is characterised by its fusion of painting and photography. 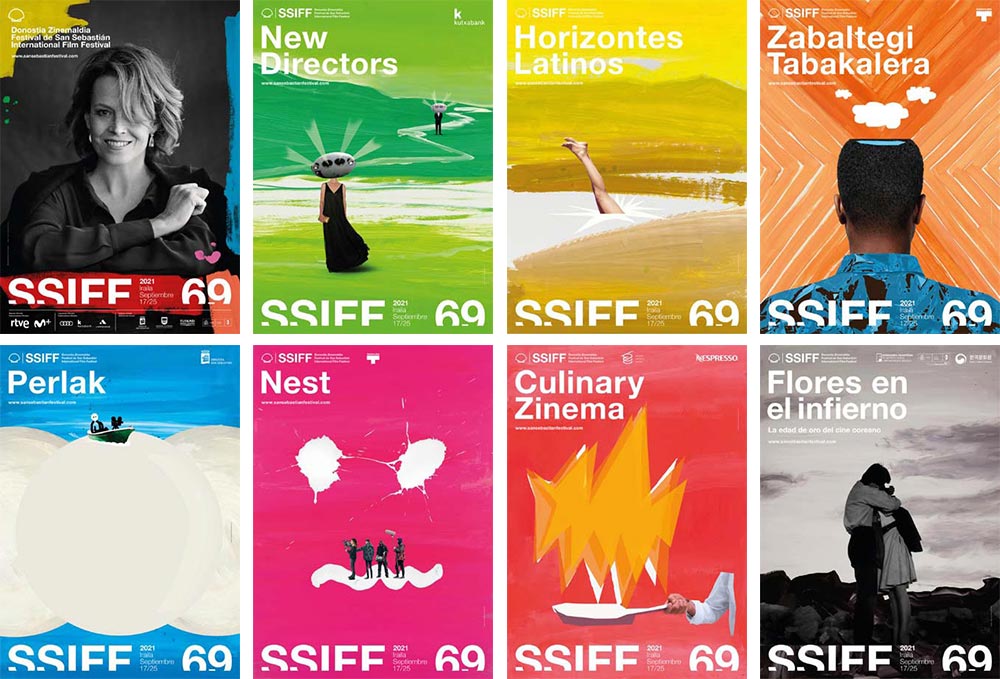 From this year on, the San Sebastián Festival will be gender-neutral in its acting awards. The Silver Shell for best actor and best actress will be replaced by the Silver Shell for best leading performance and for best supporting performance. “The change arises from the conviction that gender, a social and political construct, is no longer a criterion that we follow to distinguish between performances. The criterion for the Jury will be to distinguish between good and bad performances, so that we will be joining our friends at the Berlin Festival on the path that they have already started out on. These are times of change and making decisions. We are closely following the current debates within the feminist movement on this and other issues. We have no certainties but we do have the will to continue evolving and helping to build a fairer and more equal society”, the director of the Festival, José Luis Rebordinos, explains. This change in the regulations makes it possible to make room for other identities that do not match male or female genders and also recognises the work in so-called supporting performances, which do not usually receive awards at film festivals. These awards may be presented ex-aequo.

The evolution of the pandemic will determine the final shape that this year’s Festival takes, which will continue to be marked by health restrictions, although the Festival is confident that it will be closer to the way it was in a year prior to the Coranavirus crisis. For the second year running, it will not be possible to use the Velodrome as a giant film theatre nor will there be any opening and closing parties, but the Festival will be recovering the ‘Flowers in hell. The golden age of Korean cinema’ retrospective, with fewer films than originally envisaged, and the Klasikoak section. Nest, the international short-film competition for film students, will also be celebrating its twentieth anniversary with a special programme of activities.

“We are banking on increasing the number of screenings and the seating capacity in cinemas compared to last year, and we also want to bring back the glamour to the red carpet. In short, we would like this year’s festival to be one that restores hope to the city after more than a year of great uncertainty and suffering for many people”, José Luis Rebordinos, concludes.

From today on, Z365, the commitment to make the Zinemaldia an all-year-round festival will be shown on our web page. When users enter the web page www.sansebastianfestival.com, they will be able to choose to access contents concerning the festival to be held in September or to browse a new section that includes the activities organized by the San Sebastián Festival during the rest of the year.

This space will provide information, among other proposals, about the Zinemaldia + Plus screenings, the research and programmes in the Zinemaldia 70. All possible stories project, the publications brought out in collaboration with other institutions that form part of the Tabakalera ecosystem, or about calls for submissions like those for the Ikusmira Berriak residency programme.

The Festival is possible thanks to the contributions and enthusiasm of many people and companies, including:

And to members of the Board of Administrators of the Sociedad Anónima Festival de San Sebastián: Spanish Government Ministry of Culture, Basque Government Department of Culture, Provincial Council of Gipuzkoa and San Sebastian City Council. 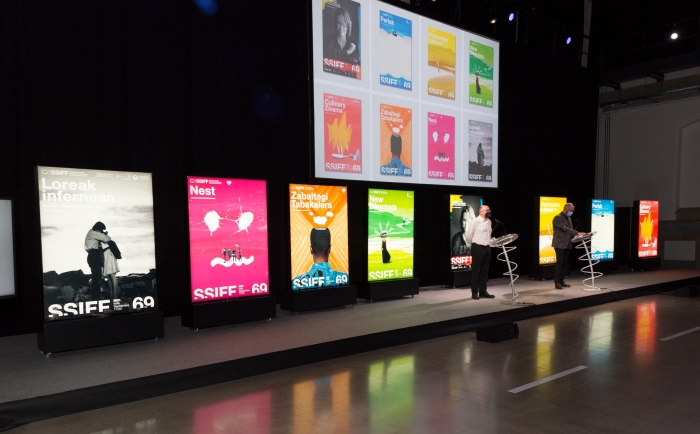 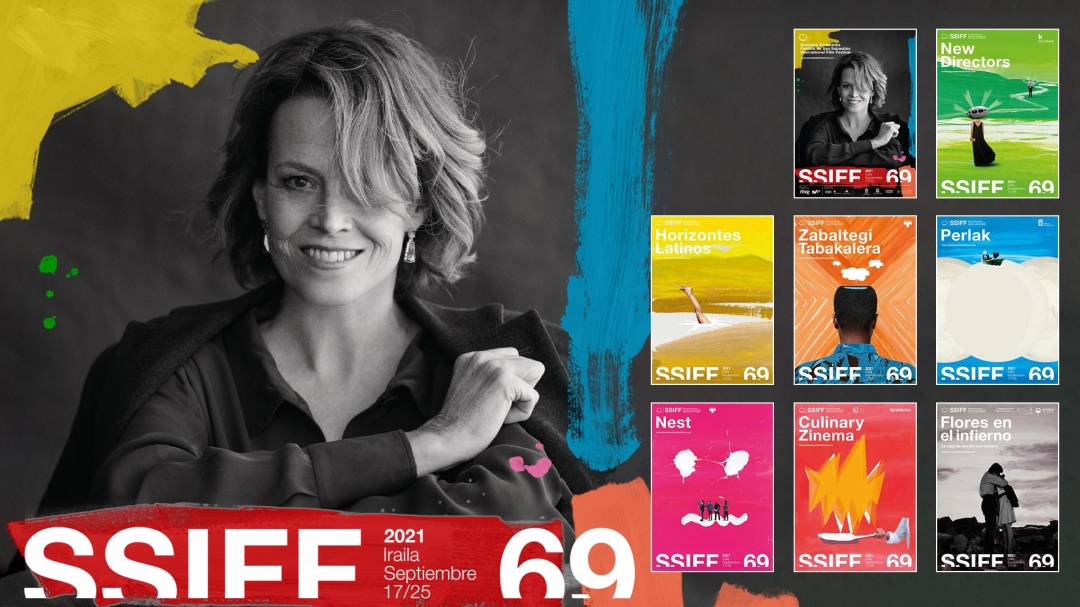