Today, the San Sebastian Festival has presented its environmental diagnosis, ratifying its commitment to continue introducing steps to reduce the carbon footprint generated by the nine days of the event itself in September as well as its activity throughout the rest of the year.

In recent months, the company Naider has been working to complete an environmental diagnosis of the Festival which, like any other international event, has a positive economic and socio-cultural impact on the city in which it takes place, while also generating an important environmental impact as a result, particularly, of the mobility and presence of a great many attendees: 178,000 spectators and 4,300 accredited guests.

To carry out the diagnosis, the carbon footprint has been measured based on detailed information for each area. Questionnaires have also been sent to all stakeholders related to the Festival, while a day was organised to provide the staff with training and skills and follow-up meetings have taken place. The categories analysed were mobility, waste, contracts, energy and commitment.

IMPACT OF THE FESTIVAL AS A 9-DAY EVENT

The study has established that, while it is underway, the Festival has a high environmental impact (568,3 tons of CO2 per day), although this figure is smaller in proportion to that of other similar events. Ten years ago, a study was carried out to calculate the Festival’s carbon footprint and, despite it having experienced notable growth in the number of films, audience members and accredited guests, the result has experienced no substantial change.

The main environmental impact comes from mobility, which constitutes 75% of all emissions, mainly as a result of international travel by accredited attendees coming from all over the world. Being an external factor on which the Festival has little room to take action, the study considers the more feasible channel to be the activation of carbon offsetting. While it studies proposals in this respect, the Festival will continue to foster the use of electric cars in its vehicle fleet: today Audi provides the Festival with eight electric cars out of a total of 30 for the transfer of guests.

During the nine days of the Festival, 4,852 kilogrammes of waste are generated (mainly paper, cardboard and general waste), of which 9% are reused and 76% are recycled. Together with mobility, this section poses the greatest environmental challenge to be dealt with and means eliminating single-use products, placing priority on reusable materials, selective waste disposal and raising awareness among attendees, among others. For example, this year the Provincial Council of Gipuzkoa will provide the Festival with carpets made out of recycled materials for the Kursaal and Victoria Eugenia venues. At the end of the edition, these carpets will be recycled for reuse as clothing or other purposes. Similarly, the 10,500 passes issued by the Festival will be biodegradable, while work will continue to separate and recycle in the Festival sites, eliminating single-use glasses and plastic bags from the Festival store, where the textile merchandising (T-shirts, bags, etc.) will be made in 100% organic cotton. Furthermore, the printed votes of the Youth Jury and City of Donostia/San Sebastian Audience Award will be replaced by digital voting. Regarding publications, the Festival has decided to either eliminate some of them or to reduce their print runs, while promoting the use and consultation of their digital versions.

The volume of contracts also generates an important impact due to factors such as infrastructures, translations and the technical staff responsible for lighting and sound. 90% of the Festival budget is consumed over the nine days in September and, as far as possible, the event has started to include the green variable to some of its contracts. As its first measure, when permitted by the health situation, the Festival parties and events will give precedence to local caterers and recyclable containers.

Regarding the impact generated by the energy used in screenings, the air-conditioning of rooms and expense due to accommodation, the largest part of the consumption is produced by third parties, i.e. by the spaces rented to hold the event and by hotels, thereby reducing the ability to influence the emission figures. This said, the Festival has already started its transition from halogen lighting to LED technology in the majority of the facilities providing outside services for the event. At this edition, 80% of the Festival’s total outside lighting will be with LED lights, representing energy savings of 75%.

According to the study, the section dedicated to commitment still offers room for improvement in areas such as single-use products, merchandising and decoration, which have neither been recycled nor are recyclable. Nor has priority been placed on sustainable mobility alternatives or on more exhaustive waste management; however, the Festival knows that it must incorporate the environmental variable to its activity given its condition of international gathering. It will therefore also promote the carrying out of public programmes serving to raise awareness in the sector in this area and will at this edition, for example, organise a round table on film distribution and the challenges that must be assumed to make it more sustainable.

IMPACT OF THE FESTIVAL AS A BODY THROUGHOUT THE YEARA

The Festival’s environmental diagnosis is not limited to the nine days of its annual edition in September, but analyses the impact of the institution and its some fifty workers during the remaining months of the year. In this case, the body’s footprint throughout the year (1.1 tons of CO2 per day) is minimal compared to that of the event itself.

In any case, the greatest impact also lies in mobility, in this case, that of travel for work. The Festival therefore undertakes to study means of offsetting its footprint and, meanwhile, to consider placing priority, in as far as possible, on travelling by train or together in a van over flights (which was already the case when travelling to the Festival de Cannes or for travel related to the film selection). The study qualifies travel to and from work of the Festival staff as excellent, given that 76% choose to travel on foot, by bike, bus or train.

Contracts during the rest of the year also have a considerable impact (translations, website maintenance...), and there is still room for improvement with respect to waste: this year, individual wastepaper baskets have been removed and single-use cups and plastics have been replaced by cups in recycled cardboard and sustainable materials while recycling stations have been installed with the aim of recycling more than 90% of waste, and the commitment has been acquired to optimise printer use given the high paper consumption. As far as energy in the offices is concerned, it is now 100% renewable and has only a slight impact. Lastly, the festival will continue to support, as it did in June this year, the plastic-free month promoted by San Sebastian City Council to raise awareness on the excessive use of plastic and to try and reduce the consumption of single-use plastic packaging or bags.

The San Sebastian Festival is aware of its responsibility and of its position as a platform for sending a message on awareness and commitment to the climate and sustainability, issues which are today more pressing than ever. In coming editions, the event will continue to measure its emissions by means of new studies, while continuing to promote actions in each of the different categories with a view to reducing its environmental impact, bringing itself into line with international goals and the defence of nature. 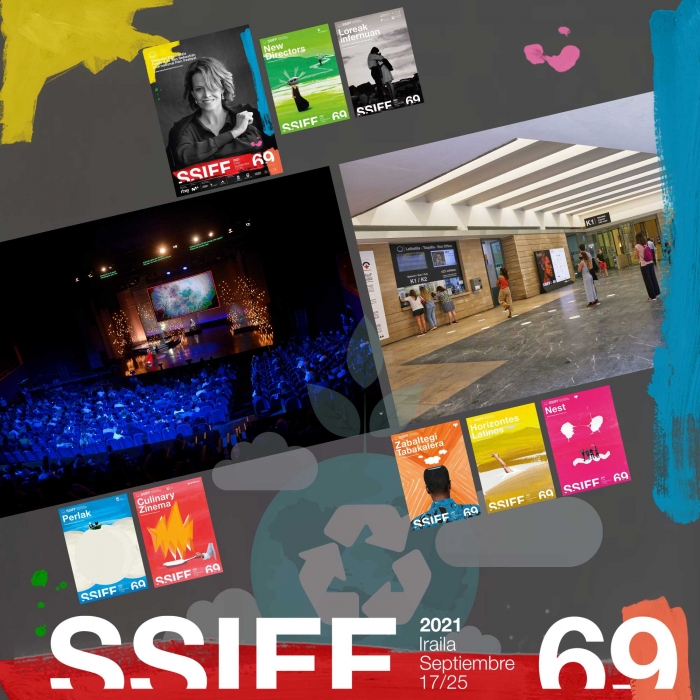