You are in: Home > 2021. 69th Edition  > News > Movistar+ and the San Sebastian Festival present the Zinemaldia Movistar+ Virtual Cinema as part of their new divulgatory partnership

This morning, at the Academia de Cine (in Madrid), Movistar+ and the San Sebastian Festival presented the terms of their new divulgatory partnership. The endeavour represents a step forward in the lasting relationship between the platform and the Festival which it is hoped will grow in the future. As relevant actors of the Spanish audiovisual industry and with the intention of promoting our cultural legacy, Movistar+ and the San Sebastian Festival will carry out the joint actions explained at the event.

Cristina Burzako, CEO at Movistar+, and José Luis Rebordinos, Director of the San Sebastian Festival, recalled the historical relationship leading to presentation of original Movistar+ series and films at the event. “San Sebastian Festival and Movistar+ have a long-standing, solid and very close partnership. The key is that we must continue to join forces in building a strong path for the industry, we must make a collective journey, almost from the responsibility of making this industry grow, of lending it value and of leaving a cultural legacy in this country”, said Cristina Burzako at the presentation. “For Movistar+, San Sebastian is a terrific platform. On the one hand, for its coverage, in making our production known to the world. And also from the point of view of reputation”, added the CEO from Movistar+, who stressed that: “In this growth, everything is changing, every day. We have the responsibility to join forces in order to continue on this voyage, to keep reinventing ourselves as an industry, but also to try and seduce and enamour the other partners. We need everyone on board, this is a collective voyage”.

The major new feature of this partnership at San Sebastian Festival’s 69th edition is creation of the Zinemaldia Movistar+ Virtual Cinema, which becomes yet another of the Festival theatres. For the first time in our country, a platform will host an A-category festival cinema. The Zinemaldia Movistar+ Virtual Cinema will offer clients of the platform the experience of a cinema with a programme of films presented for the first time at San Sebastian Festival and, simultaneously, on Movistar+.

According to Cristina Burzako, the inclusion of this virtual cinema “also represents the responsibility of guaranteeing that clients can access the San Sebastian Festival from any part of Spain” at a time when we are still in the midst of the pandemic. “We will learn and grow, and I am convinced that next year there will be even more films”, said Cristina Burzako.

At this edition, a selection of new films will be presented in different sections of San Sebastian Festival, including titles in the Perlak, Zabaltegi-Tabakalera, Horizontes Latinos, Made in Spain and Zinemira sections.

A varied selection to cover a wide spectrum of tastes including, among others, Ouistreham / Between Two Worlds, by Emmanuel Carrère; Petite Maman, by Céline Sciamma, and Guzen to sozo / Wheel of Fortune and Fantasy, by Ryûsuke Hamaguchi, in the Perlak section; El empleado y el patrón, by Manuel Nieto, in the Horizontes Latinos section; Hombre muerto no sabe vivir, by Ezekiel Montes, and Ama, by Julia de Paz, both from the Made in Spain section. Films from France, Japan, Colombia, Belgium, Argentina, Russia, Mexico, Costa Rica, Switzerland and, of course, Spain.

"Just as a spectator can go to a cinema in San Sebastian, here any spectator in Spain or Andorra will have the opportunity to enjoy the cinema experience, paying the same price as they would to go to the cinema in San Sebastian. This is a virtual cinema, with a limited number of spectators. It is an extension of the Festival, with films that will later continue on their way, having their release in cinemas or screening on a platform such as Movistar+”, said José Luis Rebordinos. “This is a fundamental moment when festivals, Movistar+, producers, exhibitors, etc. must work hand in hand...”, stressed Rebordinos.

The Zinemaldia Movistar+ Virtual Cinema will be included in the San Sebastian Festival Space, available on the platform from Friday September 17, opening date of the event. The space will also offer successful movies to have participated in earlier editions of the Festival and films starring this year’s Donostia award-winners, Marion Cotillard and Johnny Depp.

Movistar+, which will travel to the San Sebastian Festival, from which it will broadcast several of its programmes, will also participate in different sections with several original Movistar+ productions. Alejandro Amenábar’s La Fortuna will be the only series present in the Official Selection, screening out of competition; Las huellas de elBulli, a documentary on the influence of chef Ferran Adrià, will open the Culinary Zinema section, while Raphaelismo and Raphael will be the protagonists of the Movistar+ Gala with the screening of an episode of the series about the iconic singer. 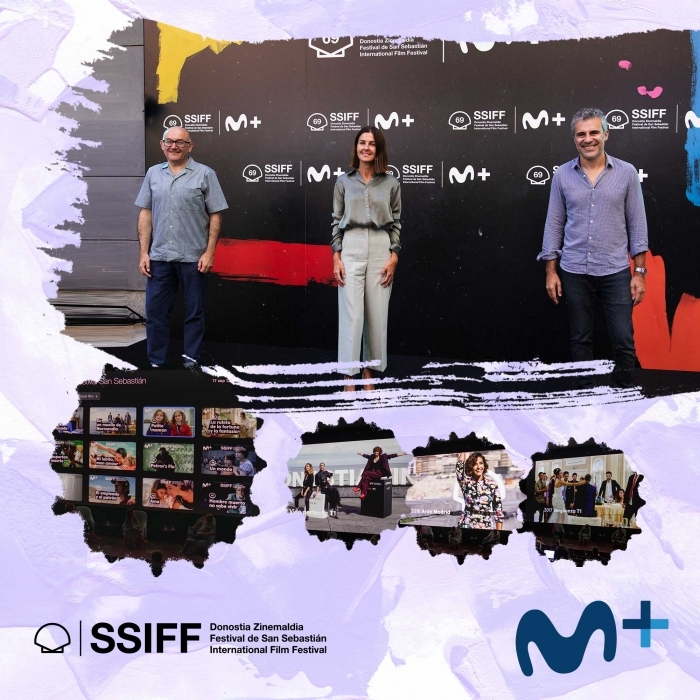