You are in: Home > 2021. 69th Edition  > News > The Koldo Mitxelena Cultural Centre is organising the ‘Filmakers’ dialogue’ course for cinema fans and film students given by film professionals

The Koldo Mitxelena Cultural Centre is organising the 'Filmakers' dialogue' course for cinema fans and film students given by film professionals. Icíar Bollaín, Lara Izagirre, Carla Simón, Rodrigo Sorogoyen and Jonás Trueba will be taking part in this course organised with the Z365 area, the all-year-round festival of the San Sebastian Festival, and Elías Querejeta Zine Eskola. It will be structured in five open sessions intended for everyone from film buffs to students. The programme, which will be held at Koldo Mitxelena Kulturunea on site and online, will start on the 14th of January and end in April.

The 'Filmmakers' dialogue' course will host a monthly session between January and April. Each filmmaker will be accompanied by one of the people that they usually collaborate with in various areas, because although the artistic vision is usually attributed to the director, in a film project, aspects like the script, financing, production, shooting or post-production undeniably form part of the creative process. For this reason, each filmmaker and their companion will share their different artistic visions and will include working materials such as dossiers, scripts, shooting plans and documents shared between the production and direction departments.

This course aims to provide cinema fans with new keys to achieving a better understanding of what is hidden from view in the production and making of a film. 'Filmmakers' dialogue' will reveal, in an entertaining series of conversations, the intra-history of the creative process of filmmaking.

On the 14th of January the filmmaker Lara Izagirre will be accompanied by the composer Paula Olaz, who worked with on her latest feature project Nora (which opened the Zinemira section at the San Sebastián Festival in 2020) and they will talk about the challenges that they face as far as music is concerned.

For her part, on the 8th of February Icíar Bollaín will be chatting with the producer Koldo Zuazua. Starting out from Maixabel (2021), premiered in the Official Selection at the Festival where it won the Irizar Basque Film Award, they will be analysing their career and will be revealing how they get projects off the ground together.

On the 18th of February it will be the turn of the Catalan filmmaker Carla Simón and the editor Ana Pfaff who are not only collaborators, but are also members of the teaching staff at Elías Querejeta Zine Eskola. Both of them will be talking, in the wake of their collaboration on Estiu 1993 / Summer 1993 (2017), about montage and their vision of cinema.

On the 4th of March Jonás Trueba and his producer Javier Lafuente, who form Los Ilusos Films, will be analysing their film corpus, focusing especially on their latest feature film Quién lo impide / Who's Stopping Us (2021), a project that has expanded over five years and which was also premiered in the Official Selection at the 69th San Sebastián Festival.

Finally, on the 8th of April, Rodrigo Sorogoyen and his scriptwriter Isabel Peña, who created the series Antidisturbios / Riot Police (2020) on Movistar+, which premiered in the Official Selection at the Festival, will share the extensive collaboration that has led them to build up one of the most solid series of films made in the last decade, working in both cinema and VOD platforms.

All the sessions will take place at 19:00, in Areto Nagusia at the Koldo Mitxelena Kulturunea.

The course, as well as decentralising the director's unique gaze, also aims to make the most traditional aspects in the development of a project better known, and as a result, to learn to watch and interpret cinema in a critical manner, in a context whose circumstances are leading it to evolve in every possible direction.

This new commitment to cinema by Koldo Mitxelena Kulturunea comes on top of the measures to support, promote and disseminate audiovisual projects that the Department of Culture of the Gipuzkoa Provincial Council is carrying out in this area. These range from the setting up of the Elías Querejeta Zine Eskola, to the grants to enroll at this school, the Lanabesa grant programme –which since 2017, has provided support for more than 70 long-term audiovisual projects– or Gipuzkoa Provincial Council becoming a member of the San Sebastian-Gipuzkoa Film Commission.

You may attend the 'Filmmakers' dialogue' course either in person or online. In both cases, anyone who is interested must register beforehand, before the 10th of January, at the e-mail address: programazioa@gipuzkoa.eus. Those who have registered will receive conformation by e-mail.

The course, in either of the two formats, is free and at the end of the course an attendance certificate will be issued for anyone who requests one. Those who choose the online format will receive an invitation to access each of the sessions via Zoom. 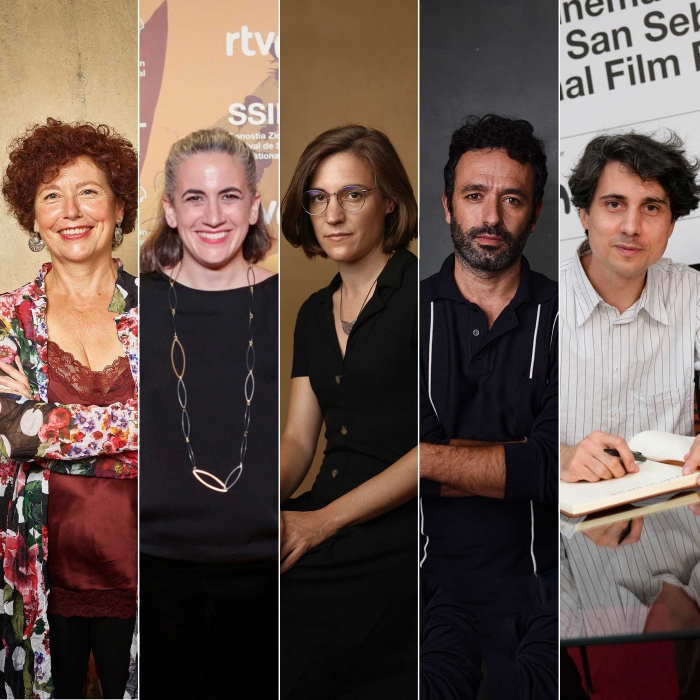