Seventeen works –13 features, one short, one series, one film at the post-production stage and one project– complete the Basque participation in San Sebastian Festival’s 69th edition, distributed over the Official Selection, Zabaltegi-Tabakalera, Zinemira, the Basque Cinema and EiTB galas, WIP Europa and Ikusmira Berriak.

Zinemira, the section specifically dedicated to Basque cinema, organised by the San Sebastian Festival and the Basque Government Department of Culture with the sponsorship of Irizar and EITB, has the collaboration of the Filmoteca Vasca, the EPE/APV and IBAIA producers’ associations, and Zineuskadi. This edition of Zinemira includes eleven fiction and non-fiction titles. Seven of these, being world premieres at the Festival, will compete for the Irizar Basque Cinema Award together with another two works present in the other Festival sections. A total of 9 productions will therefore compete for the award of 20,000 euros going to the production company or companies of the winning film.

Javier Corcuera (Lima, 1967), winner of a Goya, a Silver Biznaga in Malaga and a Special Mention from the FIPRESCI jury in San Sebastian for La espalda del mundo (Zabaltegi-New Directors, 2000), will return to the Festival with No somos nada / We Are Nothing, a non-fiction movie shot during the farewell tour of La Polla Records, the historic punk band fronted by Evaristo Páramos.

The premier of Aztarnak – Huellas / Imprints, the second feature from Maru Solores (San Sebastian, 1968) following Camera obscura (Zinemira, 2012), will close Zinemira. The film from the author of the prize-winning short film Dortoka uhartea (La isla de la tortuga, 2002) reflects on the imprints left upon us by the years of our childhood of which we have no recollection.

Filmmakers Iñaki Alforja (Pamplona, 1967) and Iban Toledo (Beasain, 1978) put their names to Bolante baten historia / Story of a Steering Wheel (Historia de un volante), investigating the disappearance of José Miguel Etxeberria Álvarez, alias Naparra, and the more than 40-year search for his body by his family, which will have its premiere at the Festival.

El radioaficionado / The Radio Amateur is the first feature film from Iker Elorrieta (Bilbao, 1977), author of non-fiction works including the award-winning I Forgot Myself Somewhere (2017). El radioaficionado portrays a man of some 30 years of age with autism who returns to the place of his birth following his mother’s death.

The sound artist, music producer and researcher Xabier Erkizia (Lesaka, Navarre, 1975), responsible for the sound of Basque productions including Converso (2017) and Urpean lurra (2019), makes his directorial debut with O Gemer / The Moaning (El gemir), an experimental film taking its inspiration from the peculiar sound made by ox carts.

Maider Oleaga (Bilbao, 1976) has presented several of her films at the Festival, including Muga deitzen da pausoa / Stepping into the Boundary (Zinemira, 2016), a project developed at the first edition of the Ikusmira Berriak residencies programme. In San Sebastian, Oleaga will premiere Kuartk Valley, the story of a western shot in a valley of Álava with the help of the locals.

Hernán Zin (Buenos Aires, 1971), author of the award-winning documentaries Nacido en Gaza (2014), Nacido en Siria (Born in Syria, 2016) and Morir para contar (Dying to Tell, 2018), has followed the band Belako throughout 2020: from the cancellation of their 60 scheduled concerts to their reinvention in the context of the pandemic with a tour in drive-in cinemas. Pandemic Tour 2020 Belako accompanies Josu Ximun Billelabeitia, Lore Nekane Billelabeitia, Cris Lizarraga and Lander Zalakain, the members of the band from Mungia.

The Basque Cinema Gala will host the premiere of Hondalea: Abismo marino / Hondalea: Marine Abyss, a non-fiction film directed by Asier Altuna (Bergara, Gipuzkoa, 1969) on the work created by the artist Cristina Iglesias for Santa Clara Island in San Sebastian. Altuna returns to the Festival after participating in the Official Selection, where he competed with Amama (Irizar Award, 2015) and screened Bertsolari (2011) out of competition, and in New Directors and the Basque Cinema Gala, where he presented, respectively Aupa Etxebeste! (Youth Award, 2005) and Agur Etxebeste! (2019), both co-directed with Telmo Esnal. Last year  he opened the Culinary Zinema section with another non-fiction film, ARZAK Since 1897.

Also competing for the Irizar Cinema Award is Maixabel. In the film by Icíar Bollaín (Madrid, 1967) competing in the Official Selection, Blanca Portillo portrays the widow of the socialist leader murdered by ETA, Juan Mari Jáuregui. Luis Tosar plays one of those responsible for the assassination in a film recreating the restorative meetings promoted in 2011 under the so-called ‘Nanclares Way’ which enabled the meeting in prison between Maixabel Lasa and her husband’s killers.

The EiTB Gala will include the presentation of the first episode in the Irabazi arte series, directed by Javier García de Vicuña and produced by Pausoka, about a young female footballer who loses her mother and returns from Barcelona to her hometown in the Basque Country.

Aitor Merino (San Sebastian, 1972), who joined his sister Amaia to co-direct Asier ETA biok / Asier and I, Irizar Basque Cinema Award in 2013, will present Fantasía, following its release at Malaga Festival. Fantasía, whose project was also developed at the first edition of Ikusmira Berriak, follows the story of a family through their memories and voyage on a cruise ship.

Igor Legarreta (Leioa, Bizkaia, 1973) will present his second feature film Ilargi guztiak. Todas las lunas / All the Moons, after screening at Canada’s Fantasia Festival and opening the FANT in Bilbao. Starring Itziar Ituño, Haizea Carneros and Josean Bengoetxea, this fable on death and immortality is set in the late 19th and early 20th centuries.

Paperezko hegoak (Alas de Papel) is the latest work by the filmmaker, professor and screenwriter Josu Martínez (Bilbao, 1986) and the directorial debut of the journalist and writer Samara Velte (Zarautz, 1991). Martínez and Velte use testimonials and unseen footage to document the operation instigated against the newspaper Euskaldunon Egunkaria.

Mireia Gabilondo (Bergara, 1965), who has presented several of her films at San Sebastian Festival, such as Amaren eskuak / My Mother’s Hands (Zinemira 2013), has adapted the play Erlauntza / The Hive with Kepa Errasti, author of the playwright. Erlauntza focusses on a group of childhood friends – played by Itziar Atienza, Naiara Arnedo, Sara Cózar, Getari Etxegarai, Aitziber Garmendia and Leire Ruiz – as they celebrate a hen night at a house in the country.

Another Basque production in the Festival programme not competing for the Irizar Basque Cinema Award due to having had its release prior to its presentation at San Sebastian, is Heltzear, which will screen in Zabaltegi-Tabakalera following its participation in the Orizzonti short film competition at Venice Festival. The short film from Mikel Gurrea (San Sebastian, 1985) has also been selected for the 2021 Kimuak catalogue. The filmmaker from San Sebastian, who completed the Ikusmira Berriak project residency, narrates a tale of overcoming the odds in a context of political violence.

In addition, two Basque film projects will also feature in the programme of the Festival’s 69th edition. Misión a Marte / Mission to Mars, the debut film from the Catalan Amat Vallmajor del Pozo (Verges, 1996) will participate in WIP Europa, the Festival’s work in progress section for European productions. Vallmajor del Pozo, an alumni of the Elías Querejeta Zine Eskola, specialising in Filmmaking, sets his first film in a post-apocalyptic Basque Country. Another Zine Eskola alumni in the Filmmaking speciality, Marina Palacio (San Sebastian, 1996) brings her first feature film, Y así seguirán las cosas / And Thus It Will Go Oncurrently underway in project format at the Ikusmira Berriak residencies, following her award-winning short film Ya no duermo (Zabaltegi-Tabakalera and Kimuak, 2020).

The Basque news conference at the Festival’s 69th edition held today in Tabakalera also served to present the new poster to show at the Basque Cinema Gala. The painter from Gipuzkoa Udane Juaristi (Azkoitia, 1985) has created the image to accompany Basque productions in coming years. For her part, the artist and filmmaker Bego Vicario (Caracas, 1962) has designed the Perlak poster to provide the setting for the presentation of films at the Victoria Eugenia Theatre.

These commissions correspond to the Festival’s philosophy to include the different disciplines of Basque art in the event. Isabel Herguera, in 2015, and Izibene Oñederra in 2016, were the first artists to design the Basque Cinema and Perlak posters, respectively. This edition the creations of Udane Juaristi and Bego Vicario take up the baton. 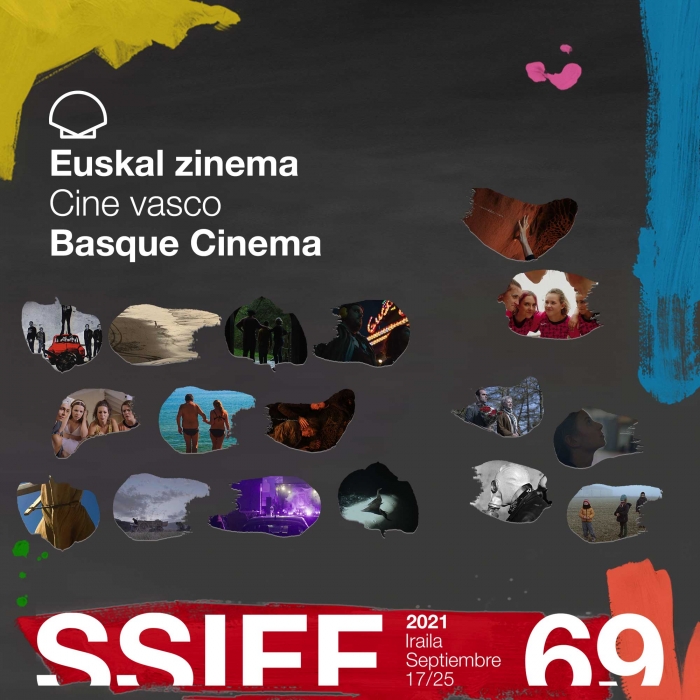