In 2018, to address the technologically driven evolution of the audiovisual sector, the San Sebastian Film Festival teamed with Tecnalia, the Tabakalera and Petronor to launch a Zinemaldia & Technology sidebar. Each year since, the section has hosted key figures – established and new to the scene – from areas which have and will impact the future of how screen industries work and are consumed.

Innovations such as blockchain, virtual and augmented reality and neurotechnology have all featured in previous editions, which included roundtables, masterclasses and the section’s highly competitive Startup Challenge, launched at Zinemaldia & Technology’s second edition.

Earlier this summer, organizers hosted 2deo, Zinemaldia & Technology sessions, a meeting place where filmmakers, technologists and professionals from the screen industries were offered the chance to learn about and discuss recent technological advances in the fields of blockchain, artificial intelligence and the use of drones.

After being held entirely online in 2020, the San Sebastian Film Festival’s Zinemaldia Startup Challenge returns to its original in-person format this year, with five exciting new tech innovations set to pitch to a group of accredited tech professionals on Thursday from San Sebastian’s Tabakalera cultural center.

Last year’s Startup Challenge similarly featured five projects, as well as a masterclass from award-winning creative director of sound at Deluxe, Marc Orts. U.K. company FilmChain, a payment system claiming to automate the collection, tracking and allocation of film company revenues, as well as predicting future box-office success, came away as the event’s eventual winner. From this year’s participants, France’s Kinetix has developed a set of AI-powered tools that offer 3D animators new methods to speed up the animation process by allowing users to upload a live action video, generate an animated 3D character and edit the resulting animation. Developed in Denmark, Klipworks is a streaming video platform that uses Amazon Web Services technology to allow content creators and commissioners to directly upload and edit high-resolution video.

Three Spanish projects are participating in this year’s competition: Owo manufactures a haptic vest that allows users to physically feel what is happening in their films and games in real time; Panoramic Plates, a service that allows filmmakers to shoot 360 degree moving backgrounds — utilized on Netflix’s “Sky Rojo”; and Raccorder, a mobile app designed for script supervisors that puts all the tools needed during production in one place.

Participating startups are offered space in an incubator for one year at one of the Basque Technology Park Network’s BICs (Business Innovation Centers) as well as access to funding of up to €500,000 ($590,000) for development. In addition, the winning project, decided by a jury, will receive €10,000.

Zinemaldia and Technology is supported by the Basque government, through its Department of Economic Development and Infrastructures. 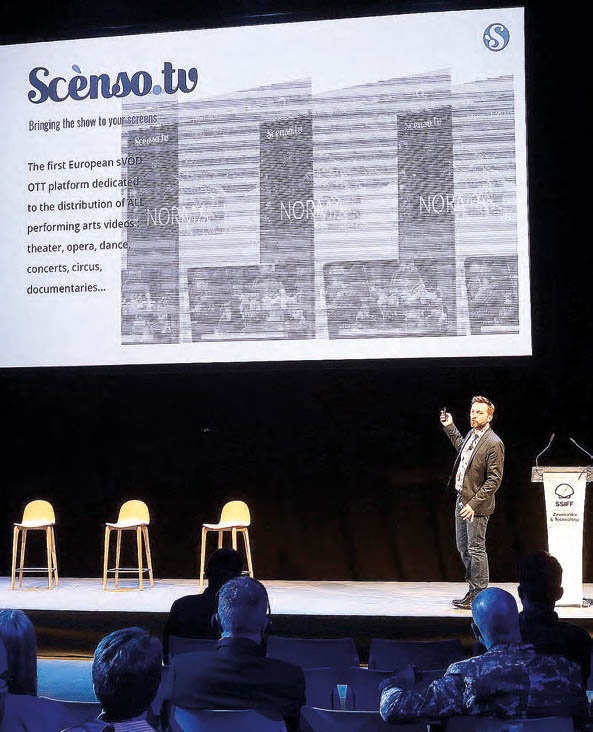 Image from the second edition of Zinemaldia & Technology (2019).