Koldo Mitxelena Kulturunea will be hosting, after the success that its first season had, the second ‘Filmmakers’ dialogue’ course, aimed at students and filmgoers, given by film professionals and organised together with the Z365 area, the all-year-round festival of the San Sebastián Festival, and Elías Querejeta Zine Eskola. Estibaliz Urresola, Irati Gorostidi, Maider Fernández Iriarte, Albert Serra, Mikel Gurrea, Fernando Franco, Pilar Palomero, Alauda Ruiz de Azua, Carlota Pereda, Alberto Rodríguez, Belén Funes, Aitor Arregi, Jon Garaño and Jose Mari Goenaga will be taking part in this course that will be structured in nine open sessions aimed at all audiences, from cinephiles to film students. The programme, that there will be no need to register in advance for, has increased the number of sessions (from five to nine), which will be held between November and May. The interest that the initiative has aroused can be measured not only by the fact that the course was full up in the first season, both in-person and online, but also by the participative nature of the conversations, rounded off by the dialogue between audience and filmmakers.

This course hopes to provide cinephiles with new tools for understanding better what lies behind the production and making of a film. ‘Filmmakers’ dialogues’ reveals, in an entertaining discussion format, the intra-history of film creation. All the conversations stress the idea that cinema is a collective profession. Each filmmaker will be joined by one of their regular collaborators in different fields (editing, acting, scriptwriting, production) or other filmmakers who they share the same age-group, starting point or formal and thematic concerns with.

This is the case of the first session, which will take place on the 3rd of November, in which the conversation will be between the filmmakers, Estibaliz Urresola, who is working on her first feature film, 20.000 especies de Abejas / 20,000 species of bees, after screening her short film Cuerdas / Chords in the Critics’ Week at Cannes and in the Zabaltegi-Tabakalera section; Irati Gorostidi, who this year has been a resident at Ikusmira Berriak where she has developed her debut film, Anekumen; and Maider Fernández Iriarte, who, after the time she spent at Ikusmira Berriak, premiered her first full-length film, Las letras de Jordi / Jordi’s letters, at the San Sebastián Festival  and is preparing her second film. The three of them were part of the Kimuak selection in 2022.

On the 22nd of November Albert Serra will be talking to Ariadna Ribas and Artur Tort, the editors of his latest films, including Pacifiction / Tourment sur les îles, which competed at the Cannes Festival this year and was also screened in Made in Spain.

In the last session in 2022, on the 13th of December, the director from San Sebastián, Mikel Gurrea will be chatting to his producer, Laura Rubirola, about his debut, Suro, which has just won the Fipresci Prize at San Sebastián, the Irizar Basque Film Award and the Award for best Basque script.

The year will begin with the conversation between the editor and director Fernando Franco and the leading actors in his latest film, which competed in the Official Selection at San Sebastian Festival, La consagración de la primavera / The rite of spring: Telmo Irureta and Valèria Sorolla. These reflections on the partnership between directors and actors will take place on the 11th of January.

Editing will once again play the leading role in the conversation on the 16th of February between Pilar Palomero and Sofía Escudé, who have worked together in Las niñas / The Girls, Goya Award for best film, and La Maternal / Motherhood, that won the Silver Shell for best leading performance for Carla Quílez.

On the 9th of March the conversation will be between the directors of two of the most outstanding debuts in 2022, Alauda Ruiz de Azúa (Cinco lobitos / Lullaby) and Carlota Pereda (Cerdita / Piggy), who both made the switch from shorts to feature films and share the experience of having taken their debut films to international festivals, before they were shown at the San Sebastián Festival, in Made in Spain and Zabaltegi-Tabakalera respectively.

One of the longest and most productive partnerships in recent Spanish cinema will be the focus of the event on the 13th of April: the one between the director Alberto Rodríguez and the scriptwriter Rafael Cobos, authors of the film that opened the most recent San Sebastián Festival, Modelo 77 / Prison 77.

Scriptwriting will also be at the heart of the conversation on the 4th of May, in the session with Belén Funes, who premiered her debut film La hija de un ladrón / A thief’s daughter (Goya for best new director) in the Official Selection at San Sebastián, and the scriptwriter Marçal Cebrián. Both of them are working on their second film.

To close the second season on the 26th of May, the Basque filmmakers, Aitor Arregi, Jon Garaño and Jose Mari Goenaga, will explain their cooperative work model and the work they have done for their first series for a streamer (Balenciaga).

All the sessions will be held at 19:00, in Areto Nagusia at the Koldo Mitxelena Kulturunea, free of charge, and will be streamed on its website (kmk.gipuzkoakultura.eus).

The course, apart from decentralising the director’s unique gaze, also aims to make the most traditional professions in the development of a project better known, and as a result, to teach how to watch and interpret cinema critically, in a context whose circumstances are leading it to evolve in all possible directions.

This commitment to cinema by Koldo Mitxelena Kulturunea forms part of the main line of work that the centre is developing: debate, dialogue and knowledge. In this context, one of the main fields of work is to support, promote and disseminate audio-visual projects. And in this respect, it is worth mentioning all the actions that the Department of Culture of Gipuzkoa Provincial Council is carrying out. These range from the setting up of the Elías Querejeta Zine Eskola, to the scholarships to enrol at this school, the Lanabesak grant programme –which since 2017, has provided support for more than 80 long-term audio-visual projects– or the Provincial Council becoming a member of the San Sebastian - Gipuzkoa Film Commission. 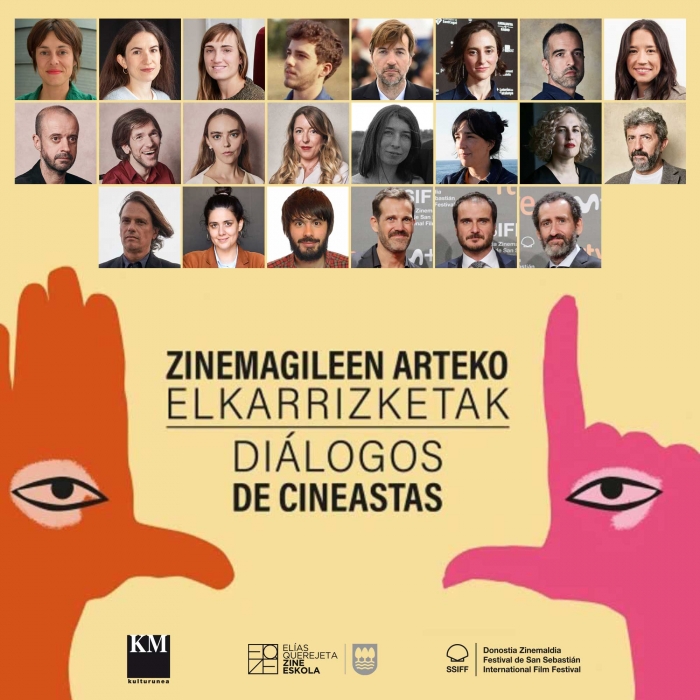