The San Sebastian Festival and Tabakalera-International Centre for Contemporary Culture have organised the exhibition Imagine a Film Festival in collaboration with San Sebastian City Council and Gipuzkoa Provincial Council to celebrate the event's 70th anniversary. The show is construed as a homage to the film industry, to the media, the cinemas, the city itself and, it goes without saying, to the audience who pack out the cinemas year after year.

Through different audiovisual installations distributed in different public spaces of Tabakalera, the exhibition shows the main landmarks in the history of the Festival, presented "as a collective work in which we all play the lead part", according to the concept of Carlos Rodríguez and Asun Lasarte from Morgancrea, the production company responsible for curating an exhibition which shows hundreds of videos coming to a total content of more than 150 minutes on some twenty screens.

The red carpet acts as the guide to an exhibition which can be entered by the main entrance in the Plaza de las Cigarreras or by the lower entrance from the Plaza Nestor Basterretxea. The section dedicated to the Public can be found on the ground floor, including photographs of the Festival submitted by the locals, while the first floor houses an installation dedicated to the media. 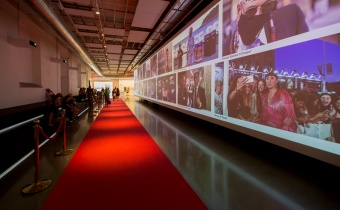 In Vive le cinéma! four filmmakers turn their practice of making films for a cinema into creating film installations for an exhibition hall. Dea Kulumbegashvili, Lemohang Jeremiah Mosese, Isaki Lacuesta and Jia Zhang-ke respond to this invitation by exploring the limits of the screen.

Each filmmaker captures light and sound by addressing themes such as life and death, the political and the everyday, and the presence and absence of the body. The cinematographic device itself is reinvented through the application of a technology more typical of artistic practices to enhance, precisely, the filmic experience.

Vive le Cinéma! is a co-production between Eye Filmmuseum Amsterdam and Tabakalera with the collaboration of the San Sebastian Festival. For these institutions, film and audiovisual creation are key to their programmes, where, in addition to their dissemination, they also promote their creation. For this reason, the four works are new productions, and specifically those by Kulumbegashvili and Lacuesta are being presented for the first time at Tabakalera. 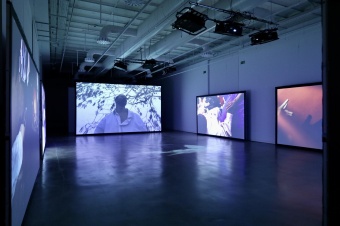 The filmmaker and multidisciplinary artist Marina Palacio brings the show [Film Not Found_Try Again], a photography project involving posters of fictitious films whose protagonists feature either people from different departments of the San Sebastian Festival or others who work in the film sector and have ties to the event.

The second floor of Tabakalera, immediately beside the entrance to the Festival offices, will house this show of false film posters which, by manipulating the images and the text, transmit the reality (complete or partial) of their protagonists, who also talk about themselves in the short texts occupying the place usually reserved for the credits.

Curators and restorers, projectionists, a photographer and a driver, a composer and a producer, as well as workers from the Production, Industry, Public Relations and Web & IT departments play the lead part in these posters of films that never have and never will exist ("non-films" in the term coined by Palacio), meaning that they can contain thousands of stories at the same time. Furthermore, each image is complemented with a short story to be read online and signed by Jesús Palacio, the artist's father and collaborator. 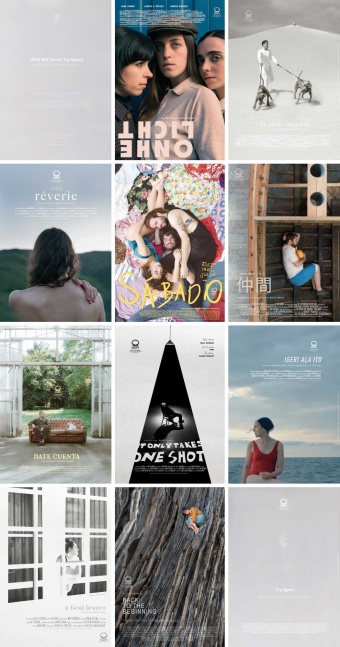 Koldo Mitxelena Kulturunea has organised the exhibition entitled 'Luis Gasca, comic and cinema', which can be seen until November 8 at the Okendo Cultural Centre. In collaboration with Donostia Kultura and with the participation of the San Sebastian Festival, the show pays posthumous homage to the professional career and life of Luis Gasca through his collection of documents related to the world of comics. Curated by Asier Mensuro and Álvaro Pons, the exhibition is made up of two parts: one dedicated to graphic and comic work with some 270 pieces (originals and reproductions), and the other related to the cinema, with some 100 photographs of important artists and unique moments taken by different photographers, belonging both to the private collection of one of Luis Gasca's daughter and to the particular collection of one of the curators, on loan for the occasion. The entire collection encompasses the widely varying expressions of the comic and its relationship with the cinema, literature and creation in general. It includes comics, magazines, fanzines, original graphic work and comic studies. At the end of the day, a wide selection enabling visitors to discover the past and present of the so-called ninth art. 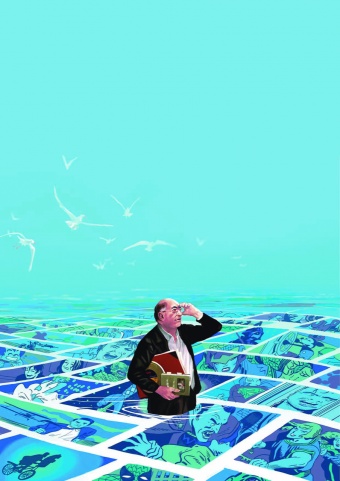 Une nuit is a two-screen installation using unseen material (not included in the final cut) of the film Un año, una noche (One Year, One Night) directed by Isaki Lacuesta (selected for the Perlak section following its screening in competition at the Berlinale). The two screens show, on a loop and in slow motion, two intensely contrasting moments: on one we see the public entering, before the start of the concert, happy and unsuspecting, where anything could still happen; on the other, we see the venue being evacuated and the ambulances waiting outside. The images are accompanied by the composition Lamenta della Ninfa by Claudio Monteverdi, which composes and decomposes until morphing into electronic music. 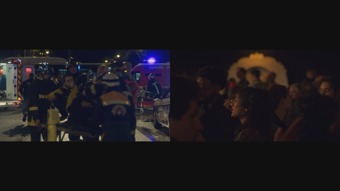 Estepas, by Pedro Marchán, is the winning short film of the second edition of Audi Future Stories, Official Collaborator of the San Sebastian Festival. Choosing a winner between all of the exciting stories received has been a real challenge, but finally, Pedro Marchán, from the ECIR film school (Reus), was chosen as the winner thanks to his surprising screenplay.

Estepas, which will have its premiere at the San Sebastian Festival, is an intense and exciting thriller about a mother and her daughter who take flight in an Audi Q4 Sportback e-tron, and the meeting with a stranger which will reveal their darkest secrets. The short was filmed in the month of July and had as its co-director, Kike Maillo, winner of the Goya Award for Best Director, and Verónica Echegui as its lead actress. 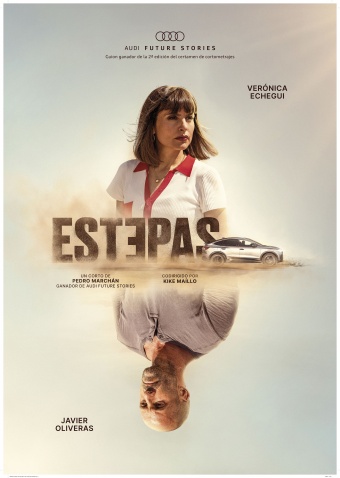 Keler, official beer of the San Sebastian Festival since 2015, returns to its free silent screenings this year thanks to which the audience can enjoy the films while wearing headphones over a cold glass of the local beer. The open air screen in the Plaza Okendo will host two screenings: El vasco will screen on Thursday 22, and Handia on Friday 23.

Admission free while places are available. 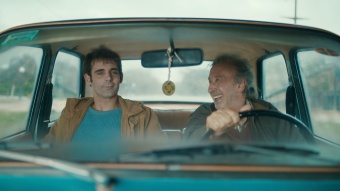 The XXXIV edition of Bideoaldia will screen a selection of short films made during the 2021/2022 academic year at the Larrotxene Cultural Centre in San Sebastian. Iulen Arana has directed the drama Koadro Goriari Heldu during the Film Directing course given by Pablo Malo. José María Agirre and Iñigo Akorta, students of Andoni de Carlos on the Gidoigintza Hastapena course, have signed Plataforma and Gauero, respectively. The works of students taking the Advanced Screenplay course given by Michel Gaztambide entitled Minus 64 Kg and Polita will also screen, directed by Deiane Moreno and Eneko Muruzabal, respectively. Screening in the co-productions section are the short films Jone K., directed by Juanmi Cuesta, and La Carga, produced by Jose Antonio Cortés. 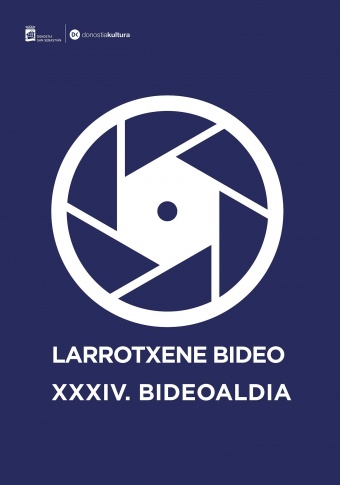 The K-Awards are promoted by the Kresala (San Sebastian), Zinetogram (Azkoitia), Goieniz (Beasain), Butak21 (Urretxu-Zumarraga) and Ozzinema (Errenteria) film clubs and go to a short film at each of the festivals participating in the 2022 edition: Surf Film Festival, Huhezinema, Animadeba, Festival de Cine en Lengua de Signos (Sign Language Film Festival), Donosskino, Zinetika, Amua In-Edit, Hator Hator and Gau Laburra. At each of these festivals a jury made up of members of the film clubs choose a film, which receives a trophy shaped like a K created by Egingela. The San Sebastian Festival will screen four of the winning short films in 2022: Ama (Leire Merino Calvo), Coquille / The Egg Child (Kévin Robic), Feeling Through (Doug Roland) and Mouse (Noah Mauchly). The screening will be followed by a Q&A session with the film team of Ama: Leire Merino Calvo, Iñigo Arkauz Uribesalgo, Leire Blanco Frutos, Ainhoa Rodriguez Gomez, Jon Angulo Regueiro and Jone Morillas Viana. 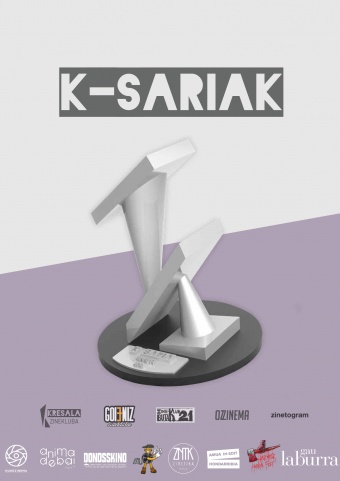