A festival running for 365 days

To understand this strategic commitment, we must look at the context of the San Sebastian Festival: the building housing its offices is also home to the institutions which are our travelling companions in this undertaking: the Tabakalera cultural programme, the Filmoteca Vasca and the EQZE itself.

These institutions jointly organise the Nest section (the International Film Students Meeting), as well as the Ikusmira Berriak residencies programme, the development of its projects and the aforementioned conceptualisation and setting in motion of the EQZE.

But the overlapping and collaborations between the institutions don’t stop there: they touch on cinema programmes throughout the year, turning the Festival into an event lasting for all 365 days of the year.

On the one hand, the Tabakalera cinema has a public screen shared by the institutions in which the Festival participates with its Zabaltegi Tabakalera screenings (also in its extended version going by the name of Zabaltegi Tabakalera Plus) and with the Nest short films. But these synergies also affect the guests: filmmakers and professionals who give tutorials, masterclasses, workshops or visits shared by the institutions. Lastly, the Festival, Tabakalera, EQZE and the Filmoteca Vasca also join forces to carry out research related to cinematography, such as the Festival’s Zinemaldia 70. All possible stories archive or Zine, the publication on research into Basque cinema.

In 2019, when the EQZE has only been in existence for a year, the University of the Basque Country recognised the EQZE post-graduate courses as master’s degrees with an equivalent academic value and, where appropriate, the same professional effects as those actually taught at the University.

A festival all year round

Tabakalera’s shared screen corresponds to the idea of a festival all year round which has been developed with special intensity in the last five years: the usual twelve months’ selection work and collaboration with festivals and programmes has been joined, in chronological order, by promotion of the Ikusmira Berriak residencies, collaboration with Tabakalera’s public film screen programme, foundation of the Elías Querejeta Zine Eskola film school (creating both an opportunity for the Festival and the obligation to rethink itself), and the subsequent creation of the Thought and Discussion department within the Festival.

With alliances between institutions and participation in cinematic programmes running throughout the calendar, the Festival seeks to fulfil a double objective. On the one hand, it aims to become a greenhouse for growing film talent throughout the year; talent which later flourishes and gains exposure during the nine days of the actual festival. On the other, it seeks to become an event that thinks about itself and about the place of film festivals in the world, in the industry and in today’s film creation.

Screening will be preceded by the second public programme of the research project Zinemaldia 70. All possible stories that will show the relationship between the San Sebastian Festival and censorship under Franco.
San Sebastian Festival’s complicated relationship with censorship under Franco is the theme of the second public programme of ‘Zinemaldia 70. All possible stories’ | Tabakalera - Donostia / San Sebastián

Screening of the winner of the San Sebastian Film Festival Golden Shell (2020) regarding its director’s comeback to the city to carry out an artistic residency at the International Centre for Contemporary Culture Tabakalera.
Focos (FC) - Dasatskisi / Beginning - Dea Kulumbegahsvili | Tabakalera - Donostia / San Sebastián 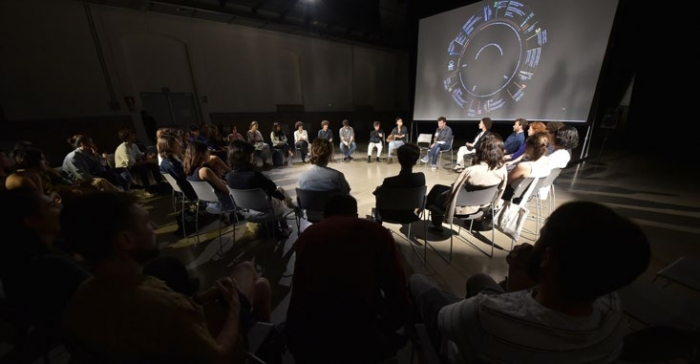