Information on ticket sales will be updated as the Festival closes the programme for the 70th edition.

The FESTIVAL commercialises its tickets exclusively; it is therefore absolutely forbidden for unauthorised third parties to proceed with their resale, commercialisation and/or distribution in any way and/or by any means, including, but not limited to: gifts as part of sales promotions, fund collecting campaigns, draws or any other kind of commercial promotions. Said exclusivity, and the exclusivity held by the FESTIVAL with regard to all of its brands, logos, anagrams, products and activities, is protected by the laws and by the provisions contained in the laws on industrial property, intellectual property, brands and advertising, as well as by the international treaties regulating such subjects, and, especially, copyright. The FESTIVAL reserves the right to take the appropriate legal action against persons or bodies contravening said prohibition, in order to defend its rights and public image.

What is the difference between the General Zone and Zone B in the Kursaal?

Zona B consists of the seats in the centre of the auditorium. This zone is more limited and only a very few season tickets go on sale for it.
The General zone consists of seats closer to the screen and those in the upper circle: 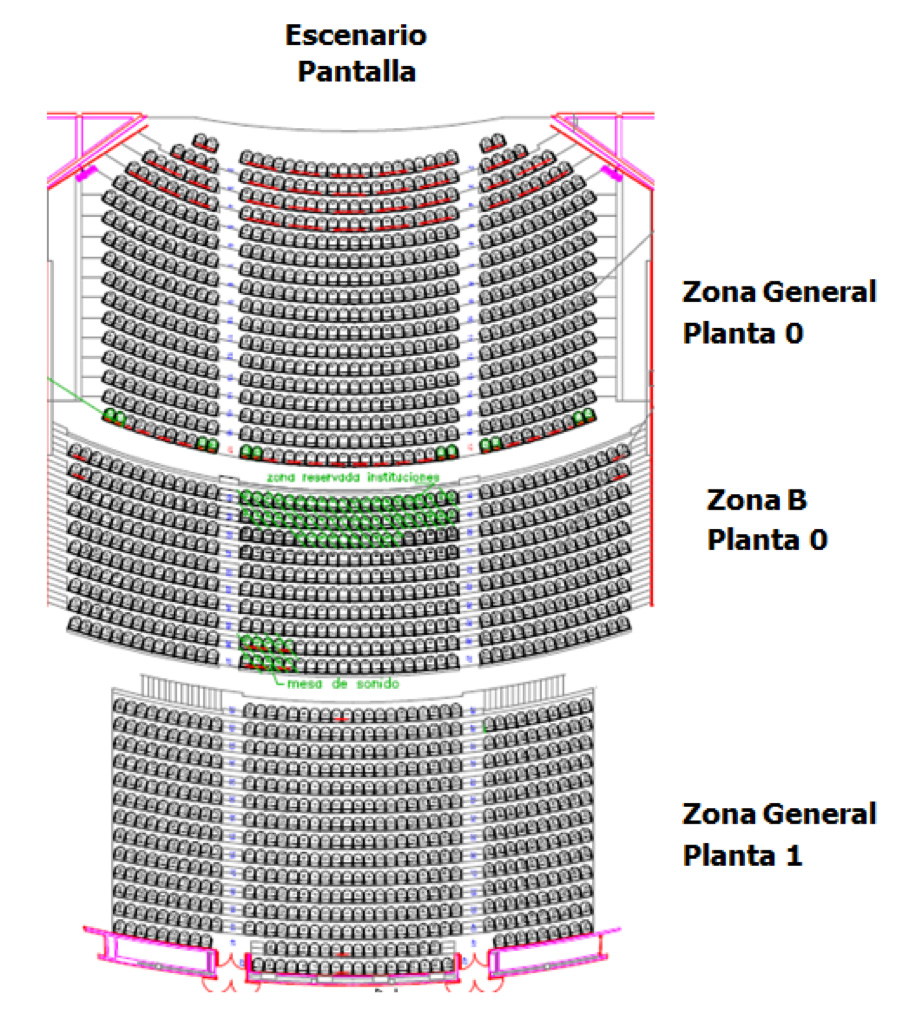 What do the Galas involve?

At the Opening Gala, the contents of the addition are presented; the event is attended by the members of the official jury and the team of the film to be screened following the ceremony.

At the Closing Gala, a rundown of the edition in images is given and the Festival Awards are announced, followed by their live presentation.

What films will be screened at the Galas?

The films screened after the galas are announced on the official Festival website once they have been established by the organisation.

What is the daily sale?

The online sale starts at 8.00, and at the other ticket desks, 45 minutes before the first screening. You may therefore find that some sessions are sold out when the cinema ticket desks open.

How many tickets can I purchase for each session?

Each person can purchase a maximum of 2 tickets for each session.

What happens if I lose my ticket?

The San Sebastian Festival organisation accepts no liability for lost or stolen tickets.

How can I purchase tickets to see a short film?

Short films are always accompanied by a feature film, meaning that to buy your ticket you will have to do so according to the title of the accompanying feature film.

When purchasing tickets, you can enter the short film title in the search engine; this will take you to the sale of tickets for the corresponding session, although it may actually be the title of the feature film which comes up.

Can I accumulate different discounts?

No. Discounts cannot be accumulated.

In the event of cancellation, how is the cost of the ticket refunded?

Once a ticket has been purchased, it will be neither changed nor refunded, unless there is a change in programme or cancellation by the Festival. Refund of the amount or exchange for another ticket must be done at the ticket desk of the venue where the incident occurred.